Unfortunately shopping cart abandonment is the same as someone browsing in your store and choosing not to purchase. There are many possible reasons.Online shopping is no different.

According to a study done by the Baymard institute over 60% of all e-commerce visitors abandon their shopping cart.

People may even add items to their basket and return time and time again before actually ultimately making their purchase. These will be seen in your order manager as non completed/"passed for payment" order status - an abandoned cart.

For the below chart we look at data from Forrester Research's North American Technographics online survey, which shows factors involved in shopping cart abandonment. 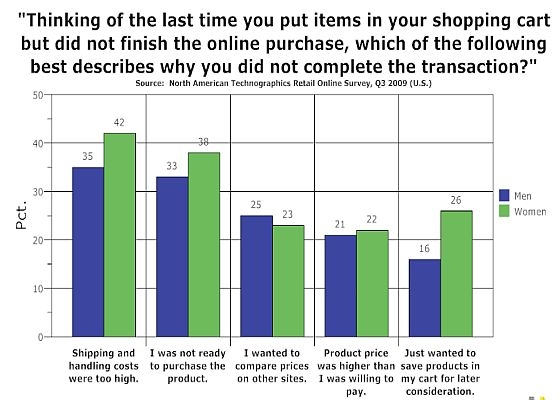 From January, Internet Explorer (IE) users will be automatically updated to the latest version of the browser.

Microsoft said it was starting the project to update millions of machines to improve security online.
Future updates to the browser would be applied without a user's knowledge to help beat scammers catching people out with fake updates.

Those who did not want their browser updated could opt out or uninstall the software, said Microsoft.
"The Web overall is better - and safer - when more people run the most up-to-date browser," wrote Ryan Gavin, Microsoft's IE boss, in a blogpost explaining the plan.

He said the data gathered by Microsoft for its security intelligence reports showed that many cyber criminals targeted old or outdated software when they tried to trick people into installing fake updates.
To beat such scams, Mr Gavin, said that once the latest version of the browser was installed all future updates would arrive silently and be applied without a user getting involved.

Chester Wisniewski, senior security advisor at Sophos, said the plan would aid those who did not see the importance of staying up to date.

"Microsoft has been struggling with browser stragglers for years," he said in a statement.
Demise of IE6

The giant upgrade programme will affect IE users running Windows XP, Vista and 7, and will first be rolled out in Australia and Brazil. Only those Windows users with automatic updates turned on will be enrolled in the programme.

Those using Windows XP will be upgraded to IE8, while those on Vista and 7 get bumped up to IE9. This will probably mean the demise of IE6, a 10-year-old version of the browser that Microsoft has been trying to kill off for a while.

Figures gathered by Microsoft suggest IE6 is used by about 8.3% of people around the world, with the biggest number of users in China, where almost 28% of people remain wedded to it.
Globally, Internet Explorer is still the most popular browser, with more than 52% of people using it, according to net market research firm Net Applications. Mozilla's Firefox and Google's Chrome are battling it out for second place.

Microsoft said it had made tools that would let people avoid or uninstall the more up-to-date versions of the browsers if they wanted to stay with an older copy.

Article taken from http://www.bbc.co.uk/news/technology-16214912
Posted by Easitill Customer Support at 11:37

As some of you may or may not be aware Microsoft are on the verge of releasing IE10. Despite new versions coming out almost annually and it being easy to upgrade people still seem reluctant.

Unfortunately as documented on various website, forums and blogs, IE7 and below versions are outdated, insecure and bug ridden. Due to these flaws it takes web developers hours in additional development to fix these flaws or work around them, include IE specific styles to counteract display issues or even redevelop and code certain parts specifically for IE, whereas firefox, chrome, safari all work fine and use the same web standards.

This could be resolved easily if people were just forced to update outdated browsers. In all Easitill websites there is the option to turn on IE detection within the website. If we detect that you are not using the latest version of IE will will warn customers/end users that this will impact upon their viewing and use of the website and they should upgrade. It seems were not the only ones trying to combat this issue.

Kogan.com, an Australian online retailer website, has found an interesting way of alerting IE 7 users; and trying to force them to upgrade to newer versions of IE or to choose other browsers like Firefox, Chrome, Opera, or Safari.

Customers who shop on Kogan.com using IE 7 will be presented with an extra tax of 6.8% (0.1% for every month since IE7 has been released). Rusal Kogan stated that their website developers had to spend as much time adding support for IE7 as it takes for Chrome, Safari, and Firefox combined. He also noted that he didn't expect anyone to pay the charges, and rather believed that everyone would most probably upgrade to a newer version of IE or use an alternative browser.

This "Internet Explorer tax" has absorbed positive comments from Kogan customers and other bloggers.

Posted by Easitill Customer Support at 11:30